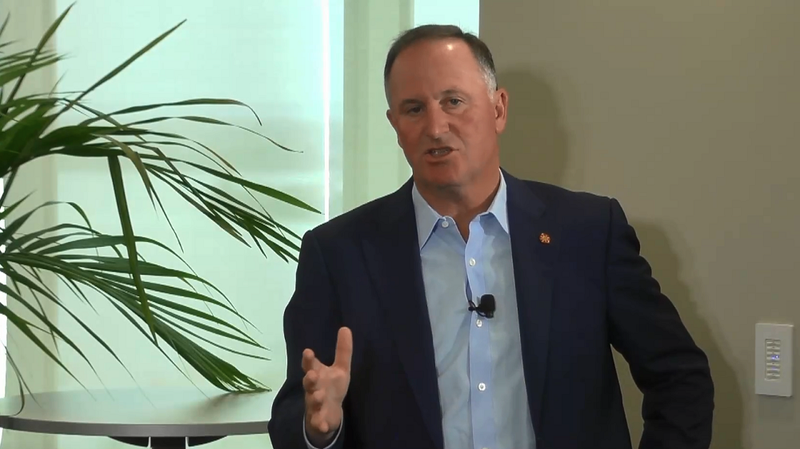 ANZ New Zealand chairman John Key is warning against the possibility of creating "zombie companies" and "an asset bubble that's going to burst on us further on".

Key, who was Prime Minister between 2008-16, told the Institute of Finance Professionals New Zealand (INFINZ) virtual conference that it was very important in a time of very, effectively cheap, money that "we don't create massive problems down the track".

"So we have responsibilities I think around not creating zombie companies, not creating an asset bubble that's going to burst on us further on. So, there's a balancing act there, and that's the point I would make. We just need to be careful, because in the end if those companies all blow up one day down the track then you can create all sorts of problems."

Key's comments in a panel discussion with the chief executives of ASB, BNZ and Westpac NZ followed shortly after Reserve Bank Governor Adrian Orr had warned about the central bank seeing a rise in highly leveraged loans and in investor activity in the housing market. The RBNZ removed the limits on high loan to value ratio (LVR) lending for banks in May, for a stated period of at least 12 months.

Key said ANZ had "historically been a little lower on the high LVR portion of our book and we are remaining a little more conservative out there - not because we are trying to be awkward - but because we do worry about a potential asset bubble growing".

"It's a difficult one, because on the one hand we want people to get on the property ladder. There's lots of reasons why they want to do that. And actually I think there's lots of historical reasons that prove its a really smart thing to do. And at times of very low interest rates it allows them to own a home as opposed to renting a home and the outcomes are better for them. And it is as asset prices go up tremendously difficult for them to save that deposit. Actually getting the loan is probably the easy bit. And actually probably paying the loan is easy, but it's amassing the 10% or 20% they need...

"But I do think we've just got to be careful we are servicing the sector not feeding a bubble."

Key stressed that the big risk was if people's financial circumstances changed.

"This is the weirdest recession I've ever been in because, man, it doesn't feel like it when you go to some of the places you go to and it's because it will be affecting one portion of the community who maybe have got less part time work. One of them has lost their job. Those kinds of things. So, it's trying to get people to understand their circumstances might change," he said.

While he thought there had been a good response from regulators in New Zealand to the Covid crisis, Key did believe there was something else that could be done.

"If you really wanted me to be out there and bold - I would say I would encourage the Reserve Bank to extend the holiday on the capital requirements," he said.

In March the RBNZ delayed the start date for the phased (over seven years) introduction of increased capital requirements for NZ banks from July this year to July 2021 - with the possibility the start date may be further deferred should conditions require it.

"The only reason I say that - and people would say you always would argue that - is...but...the biggest sector that's going to be affected is agriculture," Key said.

"Now, you can also make the case we've got the biggest book at ANZ. We do, but that book actually on a relative basis has been declining, so it's not purely self interest. But what's going to happen is, if those [capital] requirements start in '21 then you've got this counterproductive thing happening."

Key said the banks were "all full" on agricultural risk, so its the only area they can "reprice". Therefore pushing out the capital requirements start time out a bit further is the sensible thing to do, he said.

Like all the banks, Key is not keen on the idea of the RBNZ - as it may do - taking interest rates negative next year. At the moment the Official Cash Rate is on 0.25%, but there's a strong expectation the RBNZ will take it negative early next year.

"It's the nuclear option - but I wouldn't go there," said Key, who believed negative rates would create negative sentiment in the market that would be counter productive.

In terms of challenges ahead, Key picked out the prospect and danger of another growth (such as seen with the finance companies in the early 2000s) in unregulated non-banking operations.

"One of the things that could be a real worry here is that if you start seeing a non-bank deposit sector really growing that starts advertising on the internet and in the Sunday papers and everything else higher interest rates under the illusion that they look like a bank when they are really mezzanine finance providers for property developers,... then hello and welcome to all the problems I dealt with when I was Prime Minister. There's a reason we wrote off a billion dollars on South Canterbury finance and all these kinds of people.

"So, I do worry that it's a space now that customers don't necessarily walk through the door to necessarily get a loan, they go to a broker...It's a great thing. It's flexible, but I think one of the real risks is you get all these....there's this disintermediation of the banks but does it come with a systemic risk to the system in that we get more and more regulated ironically they get less and less regulated but somewhere along the line that does not end in a happy marriage."

This story was originally published on Interest.co.nz and is republished here with permission.