ANZ economists have changed their call and now see the Reserve Bank making another two double-jumps in the OCR at the next two reviews; not ruling out 75 point hike in July 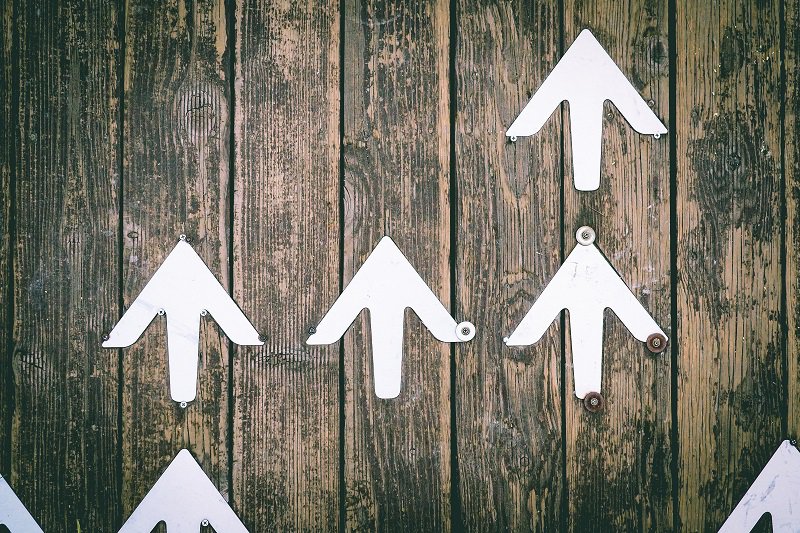 Economists at the country's largest bank, ANZ, have now changed their call and expect the Reserve Bank (RBNZ) to produce double hikes in the Official Cash Rate at each of the next two reviews.

If they are right - and it's what an increasing number of economists believe - the OCR, which is 2.0% at the moment - will be at 3.0% by the end of August.

And that would mean the OCR, which stood at 1.0% into April, will have basically tripled inside five months due to four consecutive rises of 50 basis points. But the ANZ economists - while not expecting it - are also not ruling out the possibility the RBNZ may hike the OCR by 75 basis points at the next review.

At the last OCR review on May 25 the RBNZ raised the rate to 2.0% from 1.5% - which was expected. But less expected was a stepped-up forecast of future rate hikes that projected the OCR would hit close to 4.0% by the middle of next year.

In his comments following the OCR announcement, RBNZ Governor Adrian Orr made clear the central bank's grim determination to battle rising inflation expectations and therefore to get actual inflation back inside the targeted range of 1%-3% again. As of the March quarter annual inflation hit 6.9%.

The ANZ economists had previously picked a double rate rise in the forthcoming July 13 review from the RBNZ but then just a 25 basis point rise in the August 17 review.

However, in their weekly Data Wrap publication they've made the change. And now see 'doubles' in both reviews.

"We continue to expect that signs of softening domestic demand will see the RBNZ return to 25bp moves, just a little later than previously anticipated," they say.

"We’re forecasting further 25bp hikes in October and November will bring the OCR to a peak of 3.5%. From there, we think the RBNZ will hold off on further hikes as inflation pressures wane – as long as there are no further upside inflation surprises."

The economists say they have not had "a big change of view" and still think the RBNZ will be surprised "by how rapidly it gets traction on domestic demand".

"But we’re just running out of time for the data to soften enough for the RBNZ to revert to 25bp hikes by August, due to a combination of strong monthly data prints for inflation and employment, as well as global events."

The ANZ economists say the RBNZ is placing a lot of weight on the strength of the labour market in its assessment that the economy can withstand a rapid rise to 4% for the OCR.

"That means the bar for returning to 25bp hikes will be very high until we start to see a meaningful easing in labour demand. And so far, that’s yet to emerge. Indeed, the small fall in GDP in Q1 was much more about labour shortages than it was weak demand. If the RBNZ assess these data as we do, they’re likely to look though the headline read."

The economists say that most recent inflation data have also offered no respite – particularly with regards food and petrol.

"While there’s not a lot the RBNZ can do about either, the fact is, petrol and food prices are both highly visible, and are driving inflation expectations higher, particularly for consumers.

"The usual policy prescription would be to look through an oil price spike, but that flexibility doesn’t exist when inflation is around 7%, and inflation expectations remain dangerously elevated.

"And food prices surged 0.7% m/m (6.8% y/y) in May. Particularly worrying is the jump in the restaurant meals and ready-to-eat food sub-group (classified as non-tradable). Inflation in this sub-group surged to 6.0% in May (5.3% previously).

The ANZ economists said the US Fed's decision last week, after release of "alarmingly strong" 8.6% inflation figures, to hike the fed funds rate (FFR) by 75bps and significantly upgrade their future projections, with the median pick for FFR to peak at 3.8% in 2023, had triggered "a rapid recalibration of market expectations for the OCR in New Zealand".

Markets were now pricing in an OCR of 4.57% in October next year, versus an already-high 4.17% a week earlier.

And the markets are pricing 66bps of OCR hikes in the July RBNZ meeting. 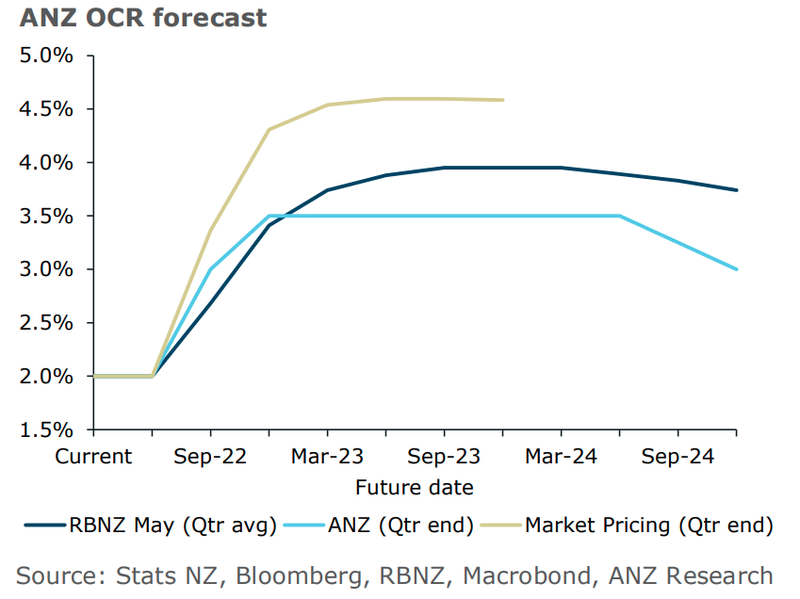 "While the RBNZ may not be inclined to raise rates in jumbo steps just because markets are pricing it, it does make it easier, all else equal.

"And the parallels between the US and NZ have been hard to miss – so could we get a similar CPI shock here? [June quarter inflation figures will be released on July 18.]

"It’s certainly true that higher inflation in the US suggests we’ll see some of that pressure in import prices. In addition, the gap between the OCR and the fed funds rate is rapidly shrinking, which could put downward pressure on the NZD [New Zealand dollar], further exacerbating imported inflation.

"Combining these global developments with lingering strength in domestic data puts us over the line to call a fourth 50bp hike in August.

"But as to a 75bp hike in July, which markets are currently flirting with, we’re not convinced. The urgency for the Fed to raise rates is much greater. Interest rates rose much earlier here, and the impacts on housing are already very clear.

"That said, one can’t rule out a 75-pointer from the RBNZ along the lines of 'while the going’s good'. The market is pricing a good chance of it, and as yet there’s no real push-back to the idea that rapid rate hikes are needed. The RBNZ will be well aware that hiking is going to get harder as the economy slows.

"Any upside surprises to inflation and it’s game on, but for now, no need to panic."