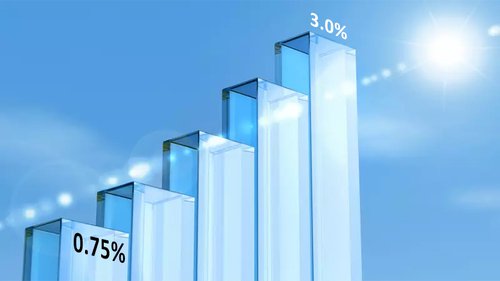 ANZ Bank's economists are now forecasting that the Reserve Bank will need to increase the Official Cash Rate (OCR) to 3% by April next year, compared to their previous forecast of just 2%.

In their latest Economic Update, ANZ's economists say the spectre of domestic inflation and the tight labour market have changed their view on how much the Reserve Bank will need to raise the OCR.

That, in turn, would push up mortgage and other interest rates more than previously expected.

"Our updated view is not based on a belief that growth will be going gangbusters," the report says.

"The housing market appears to be coming to a very sudden stop, households are facing significant cost of living stresses and have subdued confidence, a shortage of workers and materials is hampering production and Omicron is knocking on our door.

"But the reality of of a prolonged negative supply-side shock is that even modest growth can stretch resources and cause inflation.

"The trade offs are unpleasant and there's no way around that," the report warns.

"Assuming no abrupt developments such as a sharp re-pricing of risk globally (which we consider a very real risk, albeit an unforseeable one), we now believe the RBNZ will need to keep on hiking right on through our previous forecast of 2%.

"We now see a peak in the OCR of 3%, with the RBNZ raising in steady 25 basis point [0.25%] steps to get there, which would take until April next year.

"On OCR at 3% might raise eyebrows, but it's half the current rate of inflation and well below household inflation expectations, currently running at over 5.5%.

"Thought about in real terms, an OCR of 3% is very modest.

"And while a 100 basis point upward revision to our forecast OCR endpoint might seem large, the fact is, a 1% upward surprise to CPI inflation would hardly surprise us at all.

"But all that is of course cold comfort to people with massive mortgages to service, particularly if the value of their house is going backwards," the report said.