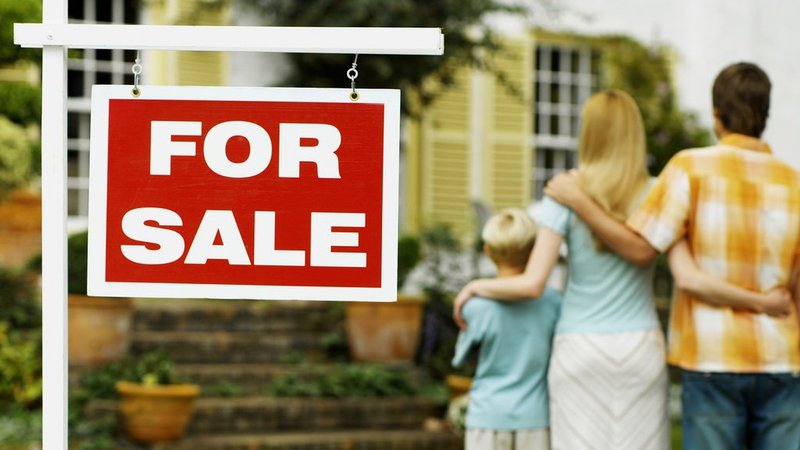 As the housing market went from the ice cold of lockdown April to white hot as quickly as August (and it's only got warmer since), one of the impressive features for me is how well the FHBs as a group were seemingly able to compete and to get their share of the houses.

But there are limits to everything.

Probably the crucial dynamic to observe as the housing market develops this year is the extent to which investor activity may or may not moderate and what happens with FHB participation levels.

The housing market is an extreme area of vulnerability for the Government. Arguably no more is this the case than with the FHBs.

Images of fresh-faced young kiwis, with perhaps a baby or two in arms, looking mournfully at a house they can't afford are much beloved by television and are lethal for whoever the Government of the day is. It's a bad look. Kiwis deprived of their birthright.

In terms of Government reaction to housing issues this year then I think its safe to say this will be very much led by how well, or otherwise, the FHBs can continue to compete in the hothouse that is the house market.

The FHBs did get very badly locked out of the housing market in the 2013-2016 period.

This was a direct result of the initial introduction by the Reserve Bank of bank limits on high loan to value ratio (LVR) lending in 2013.

The original iteration of the LVR limits, which made no distinction between different categories of borrower, ended up hugely disadvantaging the FHBs, who were reliant on raising enough cash for a deposit, while investors of course could use equity in existing properties to easily borrow and outbid the FHBs.

So, during the 2013-16 period we saw FHBs relatively existing on crumbs, often having an under 10% share of the mortgage monies being advanced by the banks on a monthly basis.

This only really changed after the RBNZ in mid-2016 started applying more rigorous measures specifically targeted at investors. Initially in 2016 investors had a requirement to find 40% deposits slapped on them. This was subsequently loosened to 30%, which is the level that applied at the time the LVR limits as a whole were removed by the central bank in May last year.

And of course, once the LVRs are reapplied in March (although banks are already treating the rules as if they've been reintroduced now) that 30% rule for investors will be back in place.

To say that removal of it had quite an impact is to say nothing. 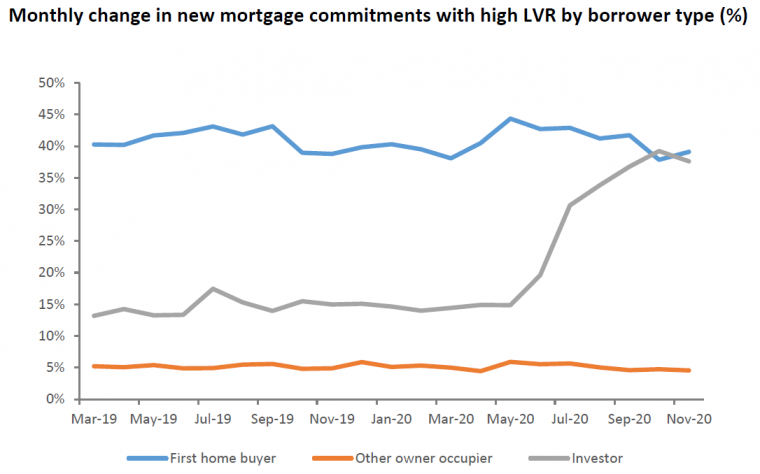 In November 2020 banks advanced $844 million to investors with deposits of below 30%. This compared with just $204 million worth of high-LVR lending to the investor grouping in November 2019.

So the amount of high-LVR lending to investors more than quadrupled in a 12 month period, as the banks took advantage of the extra wiggle room afforded them by the lifting of the 30% deposit rule for investors. 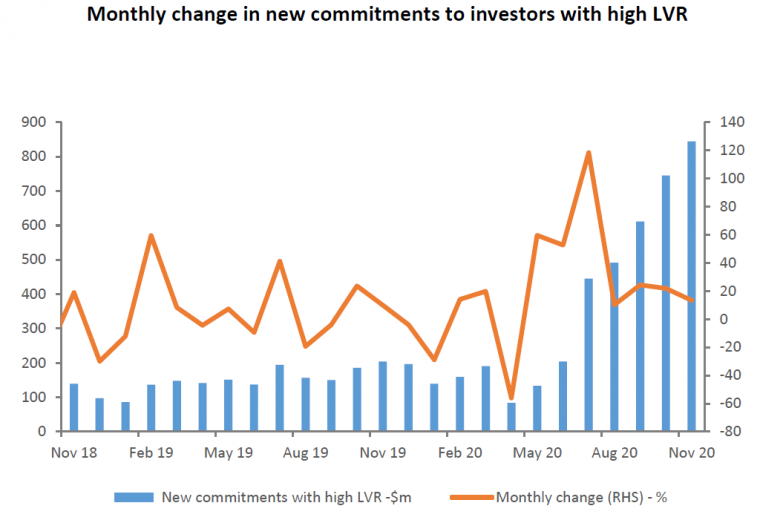 The RBNZ's latest monthly mortgage data that will cover December, are not out till the end of this month. The November figures (on which the above RBNZ graphs are based) were released on December 23, 2020 in the shadow of Christmas and so therefore didn't quite get the attention they deserved.

They were, in a word, spectacular. The total amount advanced, at $9.3 billion, was an all-time record, absolutely smashing the previous record of $7.8 billion set just the previous month. 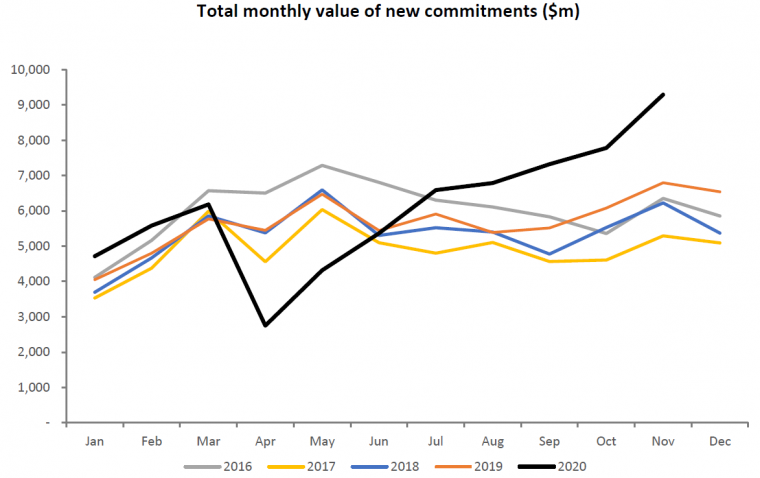 How did the FHBs do in all this?

On the face of it, very well. They borrowed a record high monthly total of $1.605 billion. And for those readers who prefer to talk about actual people rather than dollar terms, the number of mortgages taken out by FHBs in November was also a record high, at 3221.

However....the FHBs share of the monthly spoils is dropping, and appreciably so.

Since that high water mark, however, while the monthly FHB borrowing figures have continued at high levels, the overall share of the total amount borrowed has been falling, to 19.8%, in August, 19% in September, 17.9% in October and 17.2% in November, which of course as stated above was a record month for FHBs in terms of amount borrowed.

It raises the obvious question of whether we would have seen much higher amounts of borrowing by the FHBs in the past few months if there hadn't been such a massive rise in investor borrowing. In November, investors in total borrowed $2.246 billion, which was that grouping's biggest total since mid-2016, and was up some 64.8% on the $1.363 billion borrowed by that grouping in November 2019.

So, really the question is what is the potential size of the FHB market? And to what extent are the FHBs now already being crimped by the resurgence of the investors? You have have to imagine this is happening to some extent. But without knowing exactly how many wannabe FHBs there are out there trying and perhaps increasingly struggling to compete, it's very hard to say to what extent.

All of which brings us back to the point that the next few months will therefore be crucial as we see whether the FHBs can continue to successfully buy houses in this current market, and the extent to which investors either do or don't pull back from the market again with the reintroduction of 30% deposit limits.

Personally, on the latter, I think there's now so much heat in the market that investors are unlikely to be dampened by the 30% rule, and I reckon the RBNZ may yet have to kick it up a gear and go for a 40% or even higher deposit rule.

Time will tell. All you can say is it is hot out there right now and the FHBs must be feeling the heat.