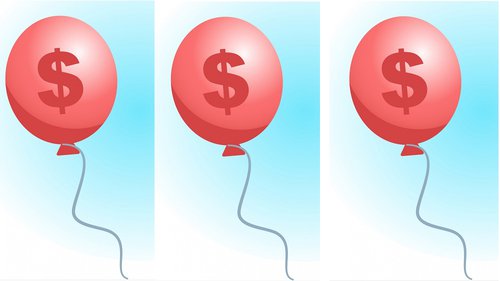 Economists at the country's largest bank now see annual inflation in New Zealand peaking at 4.2% during the current, September, quarter.

And the ANZ economists believe that annual inflation, which soared to 3.3% in the June quarter, will stay outside of the Reserve Bank's targeted 1% to 3% range for some time - only dropping back to 3% by June of next year.

While all the major bank economists have been pushing up their near-term inflation forecasts following the actual June quarter figures being so much stronger than expected, a pick of 4.2% as by ANZ appears to be the highest so far.

In an NZ Forecast Update publication, ANZ economist Finn Robinson and senior economist Miles Workman say they've "revisited" their assessment of capacity pressure in the New Zealand and believe the country currently has a 'positive output gap' - meaning essentially the economy is trying to grow faster than supply constraints will allow. They see that situation enduring over the course of this year and next.

"We expect that CPI inflation will reach a high of 4.2% [year-on-year] in Q3 2021, as shipping disruptions, the border closure, materials costs and other one-off factors (eg rates increases) see prices surge. Underneath all this is a strong underlying inflation impulse, driven by the very tight labour market, rising inflation expectations, and firms finding that they have the power to pass on higher costs to consumers," they say.

On the capacity pressures, Robinson and Workman say the economy is currently trying to grow faster than Covid disruptions and labour shortages will sustainably allow.

"With goods in short supply, the labour market at or around full employment, and labour demand continuing to rise, demand in the economy is surging ahead of supply (ie a positive output gap). That puts a lot of pressure on costs, and importantly, we’ve seen firms passing on these rising costs to consumers."

"We are forecasting the OCR [Official Cash Rate] will be lifted 25 basis points at the August MPS [Monetary Policy Statement], with subsequent hikes at each MPS until the OCR reaches 1.75% in November 2022. However, the strength in inflation means that an October hike is a possibility."

But in the near term they expect "very strong" inflation over the current quarter. 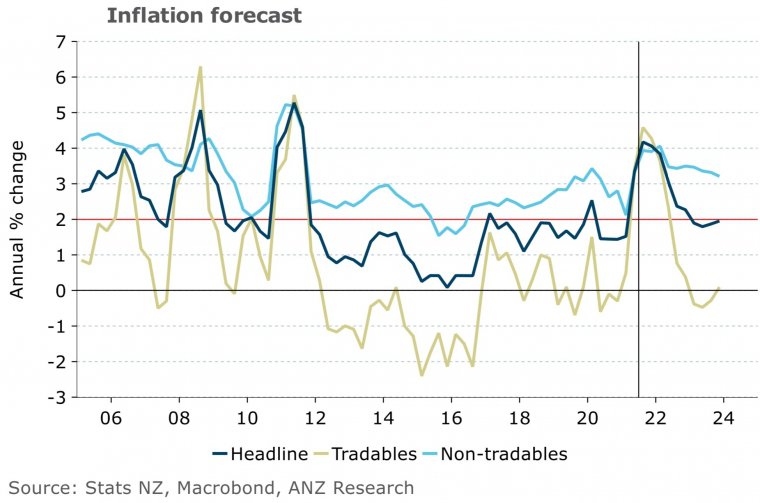 "This reflects a continuation of the drivers we’ve seen recently: housing costs, transport costs (in particular petrol and car prices), and food prices. In Q3 we can also add larger-than-usual council rate rises to the mix too. And the shipping disruptions from Covid are showing no signs of slowing, with costs continuing to surge at an almost exponential pace. Obviously that can’t continue forever, and we do expect a sizeable retracement of some of these price increases in the future. But for now, these costs continue to put pressure on consumer prices."

In terms of why they think inflation will be brought back down again, Robinson and Workman say the anticipated OCR hikes "will be very effective at taking some of the wind out of the economy’s sails".

"That should put a dampener on domestic inflation pressures, and help to contain rampant household inflation expectations. But the tight labour market should still keep non-tradables [domestic inflation] running slightly over 3% y/y. This will be essential for meeting the 2% inflation target in the longer run, given that the removal of large tobacco excise tax rises is expected to knock 0.2-0.3 percentage points off headline inflation.

"Secondly, significant disruptions to the global economy caused by Covid are expected to dissipate. While slow vaccination progress and the ongoing development of new Covid variants has slowed this process down, eventually things should start to normalise, although what the post-Covid 'normal' looks like and when we get there are both very uncertain. We do expect to see some of the crazier price increases reversed (at least partly), especially around global shipping. So while we’re forecasting very large rises in tradables prices over the next year, we’re also very likely to see prices fall further out."

For the future, the two economists see "balanced risks" to the inflation outlook.

"On the downside, there’s risk that a global normalisation in prices and shipping costs could see tradables inflation fall significantly enough to drag overall inflation well-below 2%. This wouldn’t be a permanent drop though – just a return to normal, that the RBNZ would likely look through (provided expectations remain well-anchored).

"...On the upside, there’s the risk that the extremely strong price rises we’re expecting in coming quarters cause inflation expectations to become significantly detached from the 2% midpoint of the RBNZ’s target range. Were that to happen, and if it were to be sustained, inflation could quickly get out of control and require a more aggressive monetary policy response than otherwise. This is one reason for the RBNZ to start removing stimulus soon, so as to head off runaway inflation expectations (which have already surged in recent months, particularly on the household side."

The ANZ's own Business Outlook Survey, next due out on July 29, will give the business sector's updated view on expected inflation levels, while the RBNZ's Survey of Expectations next due on August 12 will also provide a much-watched view of where inflation's seen as heading, particularly over the next two years.