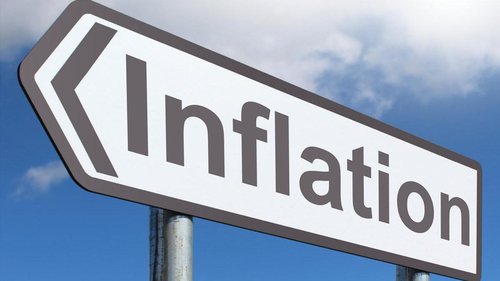 Economists see a diminishing risk that New Zealand will get the dreaded deflation - which means that the Reserve Bank is expected now to be under less pressure to keep pushing interest rates down.

Whereas not so long ago it was almost universally thought among economists that the RBNZ would take the Official Cash Rate down below zero in the early part of this year (from the current 0.25%) this is now being seen as unnecessary. Indeed ANZ economists changed their call last week and now don't see the OCR going negative.

December quarter inflation figures are set to be released by Statistics New Zealand this week (Friday, 22nd) and these are expected to be weak - but that's usual for this time of year.

With inflation having bounced quite strongly post-lockdown in the September quarter (0.7% rise), December quarter inflation as measured by the Consumers Price Index (CPI) is being picked as somewhere from zero to 0.3%.

The Reserve Bank is picking a 0.2% rise in the quarter and an annual rate of inflation of 1.1% - which puts the rate towards the bottom of its official target range of 1% to 3%.

ASB senior economist Mark Smith says the ASB pick for the CPI is in line with RBNZ expectations, with annual CPI inflation falling towards the lower bound of the 1-3% medium-term inflation target.

"We expect annual readings for core inflation measures to ease, with the majority moving below 2%. Risks are broadly balanced, but we admit a greater degree of uncertainty than usual around our CPI pick given the impacts of Covid-19, he says.

"Looking ahead, we expect annual headline inflation to dip at the start of this year but to gradually firm thereafter, with more upside risk now accumulating to the inflation outlook. The NZ economy has proved to be more resilient than we expected, and the housing market is booming, which will lift housing-related prices in the CPI. Some of the downside risks for the economy and medium-term inflation look to have dissipated. The risk is growing that we revise our above-consensus forecasts of inflation higher. However, we do not expect annual CPI inflation to settle above the 2% target mid-point for a while yet given the significant headwind to growth and pricing power posed by Covid-19."

Smith says the "diminished risk" of deflation suggests that the OCR is unlikely to move lower from its current 0.25% record low.

"However, the RBNZ is expected to maintain highly stimulatory settings until it is confident economic activity and the labour market have turned the corner. This will mean tolerating higher inflation if need be.

The RBNZ will utilise other policy levers - including the Funding for Lending Programme (FLP) and its Large-Scale Asset Purchase Programme (LSAP) - to keep borrowing costs low and bolster liquidity. The OCR is unlikely to move up for a while yet."

"Looking forward, cost pressures from supply disruptions will boost inflation, though this is expected to prove temporary and the RBNZ will look through it. We expect a temporary lift in inflation to above 2% mid-2021, followed by a retracement into 2022."

Kendall said "headwinds" from the high NZ dollar and low inflation expectations will be slow to dissipate, "but the outlook for inflation over the medium term is now looking more assured, and we have updated our forecasts to reflect this".

"The outlook for demand is looking better and inflation expectations are on the rise, meaning a persistent lift is looking more achievable. It will be a slow grind higher, but inflation pressures look set to build, with a return to target by mid-2023.

"Recent developments reduce the urgency for monetary stimulus, with risks now less clearly skewed to the downside. We now expect the RBNZ to cut the OCR to 0.1% in May then hold thereafter. Although there is less need for stimulus, downside risks to the inflation outlook remain a concern and the RBNZ will remain vigilant and poised to act if required. That means continued dovish rhetoric, an easing bias, and an expansionary stance of monetary policy for a long while yet."

The RBNZ will want to be assured that inflation is close to target before contemplating policy normalisation, Kendall said.

"...And it won’t be until 2022 that we will see that manifest. In that environment, it is hard to imagine interest rates going higher any time soon. Until an improvement in inflation is finally seen, risks will remain skewed towards interest rates going lower, not higher – and the RBNZ will continue to reiterate a willingness to do more if required. That means an easing bias and stimulatory stance of policy for a long while yet."

Westpac economists say they expect a "flat" inflation outcome for the quarter, which would see annual inflation slow to 1.0% - right at the bottom of the RBNZ’s target band.

"The December quarter is usually a soft one, mainly due to seasonal declines in food prices. Normally that’s partly offset by rising travel-related prices during the summer holiday period, but we expect less of that this time. Overseas airfares, which would normally rise sharply at this time of year, have been largely excluded from the CPI, and while we expect some increase in domestic airfares and car rentals, it will be less than usual," they say.

"The well-publicised disruptions to imports are the main uncertainty around our forecast. We haven’t seen widespread evidence of outright price increases as a result of supply shortages, but this could manifest instead as an absence of discounting. We’ve already made a small allowance for this in our forecast, but the risks are still to the upside."

Kiwibank economists are also picking the CPI to be flat over the quarter.

"Food and transport prices are expected to be the largest downward contributors, the latter weighed down by lower petrol prices," they say.

"Working the other way is expected to be housing-related price gains. A rampant housing market, in part due to a shortage of housing, is expected to generate decent rent and the cost of construction increases. In addition, we may see some pockets of inflation in retail-related prices. Supply chain issues caused by bottlenecks at our major ports made it tough for many retailers to ensure shelves were stocked for the Christmas rush. A situation where any pre-Xmas discounting was less likely. The RBNZ is unlikely to be too concerned if Q4 inflation falls below forecast. And while in the near-term inflation is expected to fall further, the Bank is probably heartened by a medium-term inflation outlook that is looking stronger."