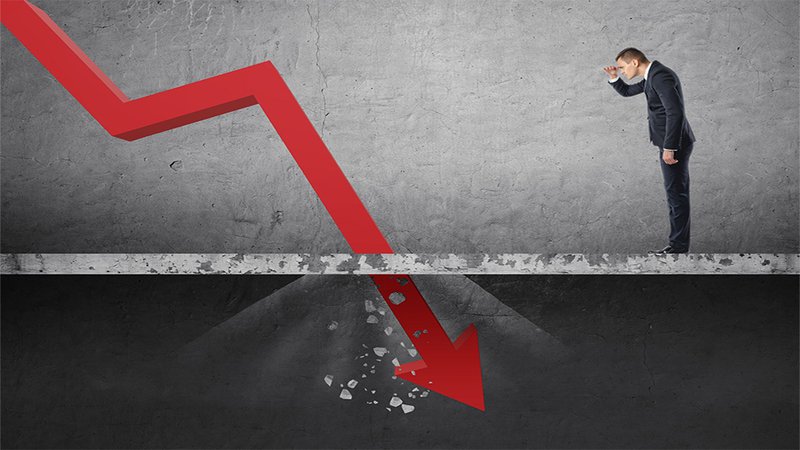 In October 2018, Sarah and George took the plunge. After talking to friends, going to seminars, and finding an adviser they could relate to (a mortgage broker), they became property investors.

They went in with their eyes open, aware that building depreciation was no longer a deductible expense. But even without that, the numbers they were confident about stacked up, maybe not in the first year or two, but they looked good after that. Yes, they would need to 'support' the investment in the very early years with some family income, but the prospect of large capital gains untaxed were attractive.

In addition to KiwiSaver, this was their retirement plan.

They purchased a $670,000 two bedroom house in Avondale, Auckland. It was rented at $500 per week. Rents were projected to rise.

They took $134,000 from their prior savings as their 'investment' to make the deposit, and that meant they got the best interest rate on the home loan of 4.98% (average of the five main banks at that time for a 1 year fixed-rate mortgage), competitive in October 2018.

And today in 2021 they are sitting satisfied, pleased they took the plunge. That house is now valued at $935,000. They rolled over the mortgage each year at a declining fixed rate, which was re-fixed in October 2021 at just 2.91%. Interest rates have gone down, rents have gone up, and they are sitting on a $265,000 capital gain even as their mortgage has been paid down slightly.

Their cash flows have eased significantly. In that first year they were -$13,200 in the hole on the investment, but the tax loss which could be offset against their joint incomes from regular work, reduced the overall cash impact to -$9,350. Now three years in, with the rent increases, the after tax cash drain is now less than -$400 per year, and hardly noticeable.

Actually, they should be concerned. Now might be a good time to quit, cash up while they are ahead. But with the Bright Line Test rules in place, they hesitate. After all, the capital gains have been excellent, and after all those operating negatives, they are still more than +$265,000 ahead, a handsome return on their original $134,000 investment. What else can do that in just three years?

But they are facing some fundamental market challenges.

First, house building is ramping up quickly, and now many analysts say it will rise much further and there will not be the supply shortage the market has got used to. Capital gains from that are unlikely to keep happening.

Second, since October 2021, interest rates on their mortgage have risen almost +200 basis points. While this won't affect them until October 2022, the bite then will almost certainly be larger. Worse, it seems likely that by October 2024 these rates could be +200 bps higher again. That means they face a 5.5% mortgage rate then and the repayments that go with it.

Thirdly, by October 2024, mortgage interest will not be a deductible expense. It is being phased out, so the hurt from that new policy will grow. 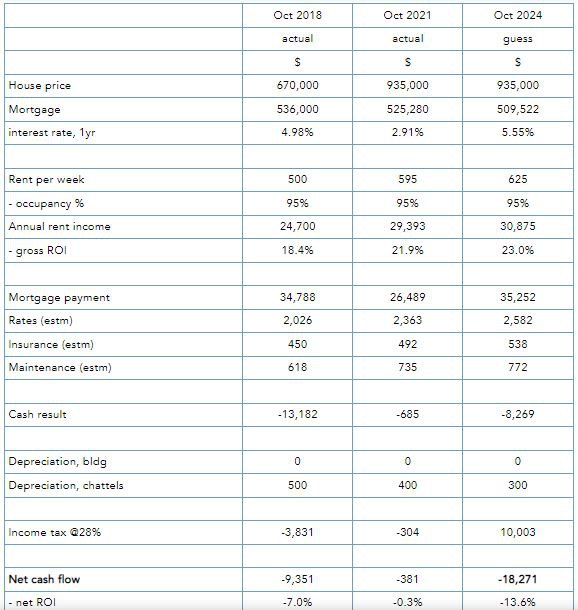 By 2024, the market dynamics could well have changed. The property cycle is likely to have turned. Even if prices don't reduce, the net cash impact on Sarah and George's household budget will have turned sharply negative.

Reality sets in when that cash outflow of about -$1500 per month is a painful crimp on their lifestyle. Time to exit, even pay the Bright Line Test costs, even if that eats into their large capital gain. At least they will be ahead overall.

And that could be selling pressure like New Zealand has never seen before. Remember, total normal sales transactions in a year are about 90,000. These sellers will be motivated - facing an $18,000 per year cash outflow from their investment. They will take a lower price (to lock in prior capital gains) just to avoid the tough cash flow reality.

And if such a selling wave starts, they will be doubly motivated to get a deal done before prices for their property fall even further.

When will the pressure stop? In theory, to where a rational 'new investor' sees a net positive return on investment. Even then those investors may be few for a while. It won't really move the market until the lure of large capital gains. Besides, investors are likely to be more attracted to the new-build market where you can deduct interest. Demand for new houses will rise, adding to supply. So that really leaves investors out of the existing home market, dependent on owner occupiers and first home buyers.

In this example, it is a sobering calculation to find a positive ROI in the future we face. And it could be a long way down.

By the above calculations, prices will need to fall to the point where the mortgage payment is only $25,000 per year at a 5.5% mortgage interest rate. That means a loan of 80% of a house price that is as low as $450,000 or less. At $450,000, the net cash flow is effectively zero. It is hard to see how another investor in a declining market would actually pay $450,000, but down at that level is when things might turn.

But that might be the time for first home buyers. Personally I doubt prices will fall that far, but it will depend on the enthusiasm of first home buyers to enter a falling market. Many who have done so in the past were motivated by the prospect of capital gain, so a mind-set change will be required to enter a falling market. Only when enough do so will prices stabilise - and their choices will be extensive when the growing wave of new properties swells.

Potential salvation could come from some shifts in public policy. The borders could open and a rush of foreign investors might return. But that will probably require a change of government; not impossible. A change of government could reduce the Bright Line Test 10 year rule, or it could reinstate interest deductibility, even building depreciation. You never know what a political party might promise.

Or secondly, interest rates could go back down again. There could be various triggers for that, including a recession.

However, for these conditions to change, investors are betting on political change to save them. Jerking political change usually isn't a good basis for sound investment decisions, and new investors may well be wary about jumping in again.