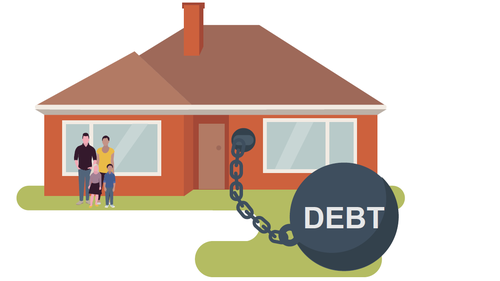 And still the debt to income ratios of New Zealand house buyers go up and up.

Not too surprising, I suppose when house prices keep going up and up.

Debt to income ratios of particularly first home buyers are still going through the roof, a crunch of the latest Reserve Bank figures on residential mortgage lending by debt-to-income ratio (DTI) shows. The RBNZ has expanded the size and scope of the data presented to include investors and a bigger range of DTI ratios.

In Auckland in September, over 76% of first home buyers (by amount - $330 million versus a total of $432 million) had mortgages with a debt to income ratio of five or above. That percentage is up from 71% in June and 57.5% in September last year.

But it's not an FHB story. All the DTI figures are going up. The new figures highlighting investors and owner-occupiers with investment collateral are particularly 'impressive' too - in a very geared and high way.

The latest figures are timely, coming as they do in the month when the RBNZ is expected to begin consultation about the potential introduction of debt to income measures into its 'macro-prudential toolkit', alongside the already implemented loan-to-value-ratio (LVR) limits. The RBNZ is stressing at the moment that while it wants DTI measures as an option it won't necessarily use them right away.

The RBNZ takes a close interest in loans that have a DTI of five and above. Internationally that's about the level that is looked at - in the UK for example - DTI measures have been levelled at DTIs of above 4.5.

However, in the wrangling that took place between the RBNZ and Finance Minister Grant Robertson (who had wanted first home buyers excluded from any DTI measures) the RBNZ appeared to come close to promising it wouldn't apply the DTIs any lower than six or possibly even seven.

As mentioned, the RBNZ has expanded the scope of the figures that have been released. Previously it didn't break out the DTI figures for investors or those for 'other' owner-occupiers (other than first home buyers) that have investment property collateral.

But below the table, also, are some of the highlights of the new information that have been pointed out by the RBNZ. I will look at that more thoroughly in a separate article tomorrow (Tuesday 16th).

These figures - again - look too high to be sustainable. Next thing is to see what the RBNZ does about it - now it can.

And these are the highlights from the new information pointed out by the RBNZ itself:

►Other owner-occupiers with investment property collateral and investors with a DTI of over seven each accounted for around 35% of the total new mortgage lending to these borrowers in September 2021."This is about five times more than the share of first home buyers with DTI of over seven."

►The share of new mortgage lending to investors with a DTI of over nine has more than doubled over the past two years, increasing from a low of 4.1% to 10.2% in September 2021.

►Other owner occupiers with investment collateral have also seen a rapid increase, rising from a low of 4.8% to 9% in September 2021

►The average share of Auckland loans to Investors with a DTI over seven climbed from a low of 28% in September 2019 to 47% two years later. Non-Auckland loans at DTIs over remain significantly lower but have more than doubled from 12% to 28%.