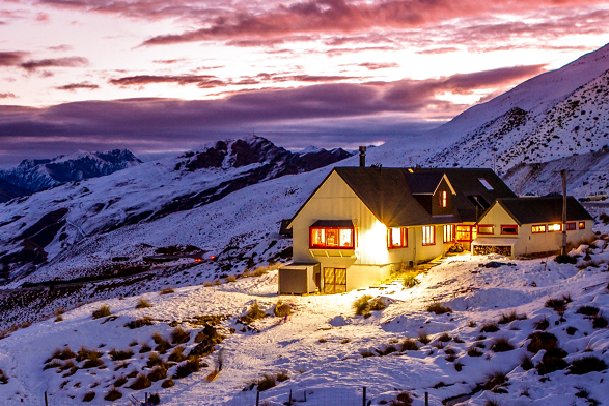 For the second consecutive month, the QV House Price Index has shown a reduction in quarterly value growth from the previous month.

The average value increased 6.6% nationally over the past three-month period to the end of June, down from the 8.8% quarterly growth we saw in May, with the national average value now sitting at $943,184. This represents an increase of 25.6% year-on-year, up from 23.7% last month.

QV general manager David Nagel said: “It’s too early to say the market has turned, but this will be encouraging news for government officials and regulators, concerned about the financial risks of an overheated property market.”

“This easing comes after a range of government policy announcements earlier this year to dampen activity by property investors and speculators, while there’s also plenty of chatter about interest rates rising later next year. But we’re also now into the seasonal downturn that normally accompanies the cooler months, so it’s difficult to attribute the cause to any single thing,” he said.

Of the 16 major urban centres QV monitors, all except Rotorua have shown a reduction in quarterly growth compared to last month. The strongest value gains over the past three months have come from Hastings at 8.6% growth in value, down from 11.4% last month, closely followed by Palmerston North at 8.5% growth, down from the 10.7% quarterly growth we reported last month.

Central New Zealand continues to show the strongest annual rate of value growth, with the three fastest growing regions all in the lower North Island. Values in the Manawatu-Whanganui region have grown 36.0% in the past year, while the greater Wellington and Hawke’s Bay regions have experienced annual growth of 33.3% and 31.5% respectively. The three lowest annual growth rates are all in the South Island with Otago region experiencing a still significant 18.6% increase, Southland showing 19.1%, and Tasman at 22.9% annual growth.

“With our borders essentially closed to new residents, we’ve given the housing supply chain an opportunity to catch its breath with record rates of new houses being constructed, particularly in the main centres. But while interest rates are still at record lows, accompanied with a dearth of property listings in most parts of the country, it’s unlikely that we see house values fall any time soon. We’ll likely see a continued slowing in the rate of price increases over the coming months as the property market absorbs the recent changes and winter really sets in,” Mr Nagel said. 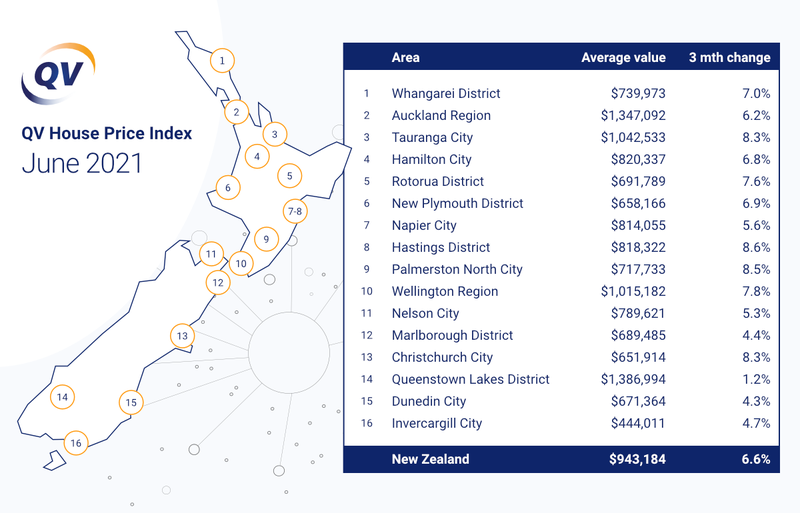 House prices have risen by an average 0.8% across the Auckland region in June − its lowest rate of monthly value growth since July 2020 and well down from the 3% and 2.3% growth we reported back in April and May respectively. Even the Auckland region’s rolling rate of quarterly growth has dropped from 8.4% to 6.2% this month.

Local QV senior consultant Rupert Yortt said reduced supply levels and low interest rates would likely continue to keep Auckland house values up for the foreseeable future, despite the region’s reduced rate of house price growth over the past month.

“Recent news about the council endorsing the Government’s National Policy Statement on Urban Development will also likely drive up land values in the areas in which this will have an effect. The proposal is to increase intensification by allowing six level developments in metropolitan centres within certain walking catchments and on key transport routes,” he said.

“This will also mean changing rules around the minimum number of off-street car parks and some desire for increased development in the special character areas where there is limited actual ‘character’. This may have an impact on many of the established central suburbs typically dominated by the appearance of villas, cottages and other early 20th century dwellings.”

Even further north, house prices in the Far North District have increased by an average 9.1% in three months to $646,390. In Kaipara, the average house price has increased by 9% this quarter to $782,661.

House prices in Tauranga continue to grow at a rapid rate, rising 8.3% for the quarter to a new average of $1,042,533. That three-month rolling average is slightly down on the 10.2% we reported last month but higher than the 7.8% we reported back in April and considerably higher than this month’s national average of 6.6%.

QV property consultant Derek Turnwald commented: “Agents report a decline in investor interest but not an increase in investors selling properties. We should have a clearer idea of their intentions by late winter or early spring, once they have had more time to gauge the market and the effect of LVR changes, the bright-line test extension and tax deductibility law changes.”

Meanwhile, he said agents were seeing a drop-off in interest from first-home buyers, “perhaps as a result of reports from the Reserve Bank and others that interest rates are likely to start rising in the mid-to-long term”.

But the good news for first-home buyers and policy makers is that Hamilton’s rate of monthly house price growth has dropped for the second month in a row, easing from 3.2% in April to 2.3% in May, and then 1.2% in June.

Local QV property consultant Jarrod Hedley commented: “New residential developments in nearby rural service towns such as Ngaruawahia, Te Awamutu, Cambridge, Matamata and Morrinsville, continue to drive demand and value level in these areas with developers also looking at larger quarter acre sections with the ability to also subdivide in these towns.”

The June quarter was another busy one for Rotorua’s residential property market, with the average house price rising 7.6% (up from the 6.4% we reported last month) to $691,789. That figure is now 21.4% higher than it was at the same time last year.

“Investor interest has definitely declined sharply in reaction to LVR changes, bright-line test extension and tax deductibility law changes. However, there hasn’t been a noticeable increase in investors selling properties yet,” he said. “First-home buyer interest has also dropped off a little, perhaps in response to the Reserve Bank’s announcement that in 2022 the OCR is likely to increase in response to inflationary pressure.”

“Despite all this, properties are still selling strongly, usually in multi-offer situations,” he added.

Meanwhile, house prices in the neighbouring districts of Stratford and South Taranaki have increased by 27.7% and 27.5% respectively over the past 12 months.

Local QV valuer Damian Hall said the rate of growth in house prices slowed across the Hawke’s Bay region in June, following a similar trend to what we saw throughout the month of May. “The market is still fairly active especially at the entry-level and despite the decline in activity across the board, we’re still seeing some strong sales out there,” he said.

“The winter months tend to be quieter and you could argue this is one of the main factors for the rate of growth slowing. However, with the effect of LVR restrictions and investor regulations, some buyers appear to be adopting a wait-and-see approach for now.”

Local QV property consultant Olivia Roberts commented: “The market is still very strong and we continue to see increases in property prices across the Manawatu region. There are still extremely low numbers of properties on the market, with it becoming more competitive now after many buyers adopted a brief ‘wait and see what happens’ approach immediately following the Government's recent changes.”

“The lower end of the market is still very stable and real estate agents continue to report strong interest with multiple offers being received, particularly for properties with subdivision potential,” she added.

“Although values continued to increase, there are signs that value growth is slowing,” said QV senior consultant David Cornford. “Investors are now focussing on off-plan purchases, and townhouse developments in the region are continuing to sell well. Investors are now less focussed on existing stock, providing first-home buyers with a good opportunity in this segment of the market.”

“There have been reports of open homes being slightly less well attended compared to the start of the year, but this isn’t unusual over the winter months,” he added. “While there continues to be a significant shortage of stock in the region and more buyers than sellers, there will continue to be upward pressure on property values.”

House price growth has been slowly easing in Nelson since March this year, with monthly price gains dropping from 2% in April to 1.7% in May and 1.4% in June. The average house price here is $789,621, which is 19.2% higher than at the same time last year.

QV senior property consultant Craig Russell said house prices were holding firm with strong demand and a lack of supply continuing to drive the market − despite a drop-off in the number of active investors currently looking for houses.

“Investors are less active in the market with anecdotally the majority of open home attendees being either owner occupiers or first home buyers,” he said. “We are seeing a number of qualified purchasers who are active in the market making relatively clean and strong offers for the right property.”

“It is still relatively common for properties to have very low days to sell or to be under offer before the first open home,” Mr Russell added.

Across the wider Canterbury region, house price growth has slowed by an average 1.1% this quarter. Selwyn District has bucked the trend so far and held steady, experiencing the most growth this quarter (8.9%), followed by Christchurch City (8.3%) and Waimakariri (7.9%).

Local QV property consultant Olivia Brownie noted that the number of residential sales in Canterbury were down on last month’s figure. “That is to be expected over the winter months,” she said. “We consider in the short term for more of the same within the greater Christchurch market, with new and re-introduced Government regulations beginning to influence the market.”

“However these factors are still continuing to be offset by a lack of supply and low interest rates, therefore maintaining some value growth,” she added.

House price growth appears to have stabilised in Dunedin, with the average value ($671,364) increasingly by less than 1% for the second month in a row. Prices have increased by 4.3% this quarter and 20.4% annually.

QV area manager Tim Gibson commented: “Things are still moving but there is a lot more uncertainty and cautious house lookers out there at present than there has been in the recent past. We’re hearing of less attendees at open homes, especially in the upper price brackets, and it appears that the banks have tightened-up their lending restrictions, which is also having an effect.”

Monthly house price growth has been tapering off in Queenstown since March, when it was 4.1%. It hasn’t surpassed 1% since then, with the latest QV House Price Index recording almost no value growth at all (0.1%) in June.

Annually, it’s a different story, with the average value up 15.6% to $1,386,994. “The removal of loan to value ratio restrictions for 12 months had the intended effect and revitalised investment purchasing with never-seen-before low cost borrowing that has enabled and motivated purchasers,” said local QV property consultant Greg Simpson.

“The market is now in equilibrium and constantly adjusting to Government intervention. It is increasingly likely that the Reserve Bank will also introduce debt to income (DTI) limits to reduce the likelihood of mortgage defaults and to support financial stability and house price sustainability.”

Invercargill's residential property market has shown little-to-no price growth for the second month in a row, registering just 0.8% in our latest QV House Price Index for June 2021. However, the city’s average house price ($444,011) remains 16.7% higher than at the same time last year.

Buller tops our list once more for annual house price growth at 40.5%, standing head-and-shoulders above its nearest two rivals, Grey District (32.9%) and Marlborough (30.1%).