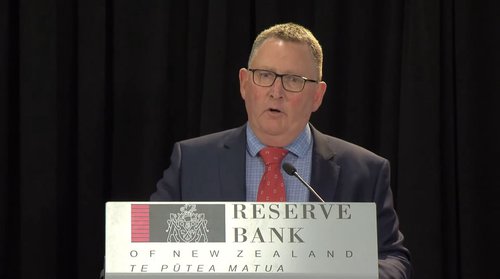 Reserve Bank (RBNZ) Governor Adrian Orr says it would be difficult to apply debt-to-income (DTI) restrictions to some residential property buyers - like investors - but not others.

Presenting the RBNZ’s annual review to Parliament’s Finance and Expenditure Committee on Wednesday, Orr reiterated his request for the Finance Minister to add DTIs to the toolkit the RBNZ has to regulate banks.

These would enable the RBNZ to restrict bank lending to borrowers seeking a lot of debt relative to their income.

Asked by a journalist after the meeting whether DTIs could be targeted to investors, Orr said: “It is incredibly difficult to segment any market and any individual with macro-prudential tools.

“The phrase “macro” means it’s the same tool for all. So, pretending we could fine tune for a particular set or groups comes with great challenge and implications.”

Asked to explain why, Orr said: “Identifying the investor, the bright-line test, the complexities of a debt-to-income tool has a whole lot of work needed in the background to understand who is facing it, how is it being deployed.

“It is again, not too dissimilar to loan-to-value ratios (LVR), but comes with challenge.”

Robertson: ‘I am somewhat sceptical’

“I’ve said in the past that I am somewhat sceptical of that and the effect it will have on first-home buyers,” Robertson said.

“But obviously, we live in a dynamic world and so I’m still receiving advice. We haven’t made a decision.”

Asked whether he would consider giving the RBNZ DTIs on the condition they are only applied to investors, Robertson said that was one of the issues he was getting advice on.

Robertson is due to announce what he described as “bold” measures to curb housing demand - particularly from speculators - at the end of February.

Reading between the lines, his comments over the past couple of months suggest he favours extending the bright-line test beyond five years. This would require investors who buy and sell residential property within a set timeframe to pay income tax on any gains made.

Commenting on DTIs, Orr said: “We’ve made it clear to the Minister of Finance and previous ministers what debt-to-income tools can do and what they can’t do, and it comes down to a political decision around whether they are willing or not to provide those tools and accept some of the challenges they may bring.”

Orr wouldn’t say whether the RBNZ would apply DTIs in the near-future, should it be given the tool.

“Having the optionality of those tools would be good,” he said.

“Implementing it really comes down to a choice of - is an intervention needed and then which tool is the most efficient, most effective and [can be used] with the most precision.”

Orr also made the point: “Under current law the Bank could not tighten prudential policies for the primary purpose of dampening house prices, if that is not justified on financial stability grounds.”

This said, he maintained it was “ambiguous” whether tightened LVR or DTI restrictions would reduce poverty and inequality.

Orr made the same point on Wednesday: “These tools may impact on housing demand at the margin. They’re not a panacea to the types of housing stories that we’re reading.”

The discussion over DTIs has resurfaced as Robertson in November turned to the RBNZ as he came under pressure over sky-rocketing house prices.

He suggested the RBNZ’s remit could be tweaked to require it to consider house prices when it set monetary policy.

The RBNZ hit back, saying this was a bad idea, but its remit could be changed to require it to consider house prices through the way it regulates banks.

Robertson on Tuesday said he was still working through the issue of potential remit changes.