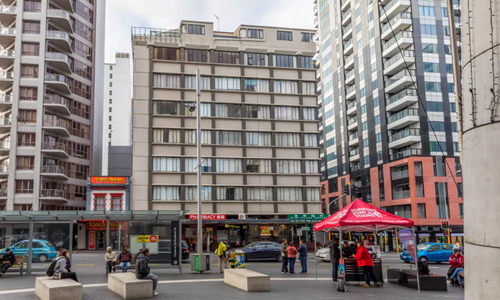 There was a surprisingly strong result at the latest central Auckland apartment auction, suggesting this part of the market may have taken on a new lease of life.

Auckland's inner city apartment market has been hammered by the onset of the COVID-19 pandemic, particularly the smaller units that are often rented by overseas students, with many suffering major declines in value.

While the larger units popular with owner-occupiers haven't been as badly affected, they have largely missed out on the big price gains evident in the overall residential property market in the last 12 months.

But there are signs the market may have started to turn.

At Ray White City Apartments auction on June 24, nine apartments were offered and eight sold under the hammer, with competitive bidding on all eight that sold.

The apartments on offer were a good mix of smaller units and larger, better quality ones, which attracted both investors and owner-occupiers as potential buyers.

The first offering was a 35 square metre studio unit in the Connaught building located just up the road from the High Court.

This has been a popular complex but is facing significant remediation issues and that has seen many owners decide to sell up, with their units often selling for around half their rating valuation (rating valuations in Auckland have not been updated since 2017).

However there were multiple buyers chasing it and it sold under the hammer for $176,000.

A slightly smaller (32sqm) one bedroom unit in the Queens Residences building on Airedale Street, which had a rating valuation of $530,000, also attracted multiple bids and sold under the hammer for $480,000.

However not all of the units went for marked down prices.

Anecdotal evidence suggests the high sales rate at the auction was the result of two main factors.

Firstly, vendors are accepting that there has been a change in the market and are being realistic in their price expectations, and secondly, buyers are coming to the view that prices for inner city apartments may have bottomed out and are less concerned about potentially losing money than they may have been a few months ago.