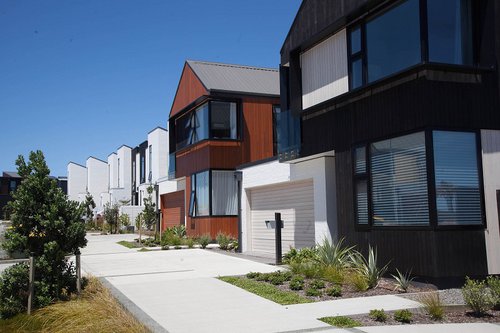 Ten years on from Auckland’s “Super City” amalgamation, Waitakere is the latest of the city’s seven historic territorial authorities to join the $1m house club.

The territorial authority in west Auckland – which formerly encompassed everything north of Manukau Harbour, west of Auckland City, and south of Rodney District – was merged with six others into a single Auckland “Super City” on 1 November 2010.

Local Quotable Value (QV) valuer Hugh Robson commented: “Waitakere has seen more than its fair share of change over the past 10 years, that’s for sure. Entirely new suburbs and commercial centres have sprung up where there was only farmland and vineyards before – areas like Swanson, Henderson Valley, and West Harbour.

“It’s hard to believe it now, but Hobsonville Point (pictured above) is another prime example of a bustling community that just wasn’t there 10 years ago. It was formerly the Hobsonville Air Base; now it’s a thriving community jam-packed with homes, schools and local businesses.”

According to Infometrics’ Auckland Economic Profile, Auckland’s population increased by an estimated 277,900 people over the last decade, with most of that growth occurring over the last five years.

“As Auckland’s population has boomed, more land in west Auckland has been rezoned for housing, with improvements to the Northwestern Motorway also making life in the west seem more attractive to homebuyers,” Mr Robson said.

“West Auckland suburbs like Avondale, New Lynn, Te Atatu, and Glen Eden have traditionally been viewed as ideal entry-level locations, but they’re quickly moving outside the typical price bracket of most first-home buyers. Even suburbs further afield, like Henderson and Massey, are expericning rapid growth.”

Keep track of the latest price movements in the residential property market with the QV House Price Index.